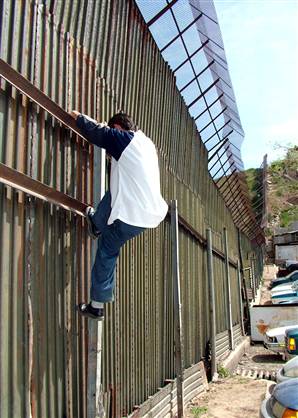 I live in the East side of Denver. I went to the movies last Friday with my wife. Monday I went to Denver Health with our Sudanese guy and his mom, and later went to Wal Mart. I distinctively remember that in each of these three places, nary a word of English was spoken. I heard French (from Africans), Arabic, and Russian, but mostly Spanish.

For me, it is rich to hear ‘divers of tongues’ in my own nation. I know for others to hear other languages, especially Spanish, it is a huge threat. Sheer numbers have brought the Hispanic language and culture to a neighborhood near you.

I’ll let you decide as a citizen how you feel about a wall around the southern border of the U.S. What does it say? What does it not say?

I’ll also let you decide why the Northern border is no threat to Homeland Security.

There are deeper questions to consider, though, if you are a Christian. The people of God have always been told that they were once sojourners and aliens (Exodus 22:21; 1 Peter 2:10), therefore they ought to treat the “stranger” with mercy and even to give them a share in the blessings of the covenant. Yet are Christians willing to do this in their own church communities?

The deeper question might pertain not to the wall around the Rio Grande, but to the wall around all of our hearts. It is trite, but you know what hour of the week is the most segregated in churches in the U.S. The movie theater, the mall, the restaurant, the marketplace, Starbucks, all of these places are more representative of Acts 2 and Revelation 5, than the Christian community.

But it doesn’t have to be this way. The Bible is a dangerous and radical document–if we would just let it speak. We have an opportunity to see the massive immigration to the U.S. as a huge test for the church, but also a huge blessing. Millions of God-fearing, hard-working ‘family values’ folks, just a neighborhood away. The harvest is plentiful, but the workers are few–at least the ones with papers.