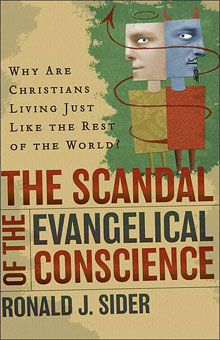 Sider’s work was one of my Lenten books.  Daniel Clendinin writes in sum of the book:

Drawing upon scientific polling from groups like Gallup and Barna, Sider takes the measure of American evangelicals on five data points: divorce, care for the poor, sexual infidelity, racism, and physical abuse in marriage. He is appalled. People who claim to be born again divorce at a slightly higher rate than the general population. Evangelicals give a meager 4% from their income. The most likely people to object to neighbors of a different race are white evangelicals. Sexual promiscuity among evangelical kids is rampant. Is it any wonder that “a mere 22% of people have a positive view of evangelicals” (p. 28)? Sider contrasts these findings from Chapter 1 with an overview in Chapter 2 of the Biblical vision of what God’s kingdom on earth ought to look like, with successive paragraphs full of Scripture quotations from the Gospels, the book of Acts and the Epistles. In stark contrast to our current reputation, Sider notes that the early Christians had a well-known and well-deserved reputation for integrity and care for the weak. Tertullian (AD 155–220), for example, wrote, “Our care for the derelict and our active love have become our distinctive sign before the enemy…See, they say, how they love one another and how ready they are to die for each other.” Even the pagan emperor Julian the Apostate (ruled AD 361–363) acknowledged the radically counter cultural life of the early Christians: “The godless Galileans feed not only their poor but ours” (p. 52).

I was reared in evangelicalism and still consider myself evangelical, so this was not a ‘point the finger’ read for me.  The book made me wonder what progress has been made by creating a ‘Religious Right’ and a ‘Dittohead’ culture over the last couple of decades if we cannot get our own house in order.  Are we ‘gaining the world’ at the expense of our souls?

I long for a ‘third way’ in the way the church can engage culture, perhaps it is being the kind of polis that the  Scripture describes–a holy and loving people.  A people who love God, neighbor, and each other.  A people who are attractive to the culture because of their holiness, wholeness, and love.

One thought on “The Scandal of the Evangelical Conscience”