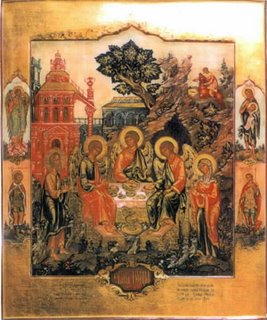 At heart in so many of the ‘Jesus fad’ discussion is if Jesus ever claimed to be God or the Son of God. John 8:58 seems obvious enough for me.

The early Christians not only believed that the New Testament taught the divinity of Christ and hence, the doctrine of the Trinity, they also experienced God in a Trinitarian way. God the Father was ‘above’ them, God the Son was ‘with’ them in the person of Jesus, and God the Holy Spirit was ‘within’ them, making them a new creation.

What puts us at odds with Judaism and Islam (Mohammed in the Koran says, ‘if Allah had a Son, I would be the first to worship him’), is our insistance that God is one yet three, and that indeed God’s greatest act was to become one of us.

So much of Protestant reflection on salvation has wrongly put Jesus at odds with his Father. In other words, God anger with us was taken out on Jesus. However, the Trinity and the Incarnation of the Son of God show us a God who is not angry, but who is reaching out to us, even before we reach for him.

13 thoughts on “I Bind Unto Myself Today”