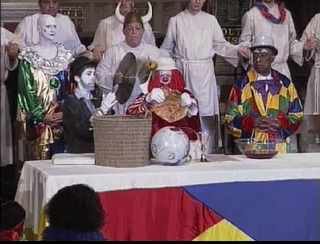 Seraph mentioned that I have not commented on the week long fiasco that was ECUSAs General Convention. I usually lay low on ‘church matters’ so as not to be too esoteric for our readers.

However, I am no longer sure that ECUSA (and many of the other mainline denominations) on a national level can call itself a ‘church’ at all. Churches do not put matters of faith and morals up to a ‘vote,’ nor are they driven by secular agendas. No one has a ‘right’ to be ordained, it is something that God calls you to. No one has a ‘right’ to anything in God’s Kingdom. We relinquish our rights for the sake of Christ and the sake of the the Body, the Church.

Conventions and Conferences only cause more and more people to become disillusioned with what they thought was a church. What these poor folk learn is that there is nothing ‘one, holy, catholic, or apostolic’ about elitists voting away the soul of their own faith.

PS The photo is not from the General Convention, but from Trinity Wall Street’s celebration of Trinity Sunday in 2005. A mime and clown mass. Kyrie Eleison.

9 thoughts on “Inclusive as Hell”