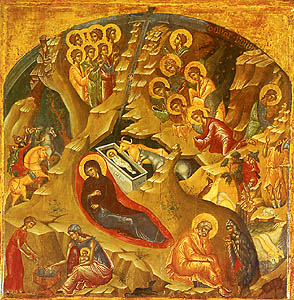 I was somewhat of an Ebenezer Scrooge this Advent.  I guess it was because there really is no such thing as Advent anymore.  No asceticism, just a lot of expansion of tummies.  No repentance, just a lot of over indulgence.  Such is the ‘holiday season’ in America.  I felt that it was 30+ days of missing the point.

Then, I got laryngitis the 23rd and am still getting over whatever it is I have had for almost 2 weeks.  I had to preach and celebrate sounding like a tiny froglet.  Bah humbug baby.

While the Christmas Eve liturgy was beautiful as always (though I tried to sing ‘Silent Night’ and nothing came out), it was not until Christmas Day that my Ebenezer attitude waned.

There are a group of refugees from Sudan and Burundi who attend our church.  Since it was snowing and hardly anyone showed up for the Christmas Day low mass, I went to pick up the refugees.  I thought that only one or two would even be out to greet me, but the whole 20+ of them were ready for the ‘big’ celebration.  They didn’t realize that the big service was the night before.  I had to make two trips and was 15 minutes late to my own service.  But it was worth it.

The service was fine and I growled my way through the liturgy, but the ‘Christmas moment’ did not come until I was taking them home.  They live a short distance away, but the snow made for a longer trip and one woman began to spontaneously sing ‘Angels We Have Heard On High’–in Kurundi.

The tempo was a bit off for my Anglicized ear, and understood not a word, until I heard ‘Glooooriaoooriaoooooria, in excelsis deo…’

Here was a group of people stranded in a refugee camp in Tanzania since 1972; children who were born in miserable conditions, only knowing life as a refugee–and yet they were singing a French Christmas carol with a Latin chorus.

No matter how the Church has failed Africa and other places throughout history, Jesus showed up in Africa and everywhere our fragile feet have tried to take the gospel.  I heard it on the lips of precious people whom God has rescued and brought to our doorsteps.  The songs of angels, ‘Glory to God in the highest…’ has reached all times and all places.  I heard it sung by His missionaries, only now they sing to my land and my people.

2 thoughts on “Gloria in excelsis deo”