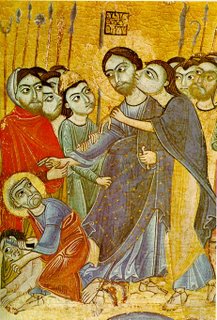 All of a sudden there is a buzz about the ‘Gospel of Judas.’ This is a Gnostic text written by a sect called the ‘Cainites,’ who venerated those punished by God in the Old Testament (like Cain), because they withstood the punishment of the cruel God of the Old Testament. The gospel of Judas says that Judas was trying to ‘free’ Jesus from his flesh–a task that Jesus put Judas up to.

The text is condemned by Iranaeus in about 180 AD. Here is his quote in full:

Others again declare that Cain derived his being from the Power above, and acknowledge that Esau, Korah, the Sodomites, and all such persons, are related to themselves. On this account, they add, they have been assailed by the Creator, yet no one of them has suffered injury. For Sophia was in the habit of carrying off that which belonged to her from them to herself. They declare that Judas the traitor was thoroughly acquainted with these things, and that he alone, knowing the truth as no others did, accomplished the mystery of the betrayal; by him all things, both earthly and heavenly, were thus thrown into confusion. They produce a fictitious history of this kind, which they style the Gospel of Judas.

Irenaus describes the Cainite Gnosticism and the polytheism around it.

Since the Gospel of Judas is a Cainite Gnostic writing written in the late 2nd century does anyone really think it can offer any ‘historical insight’ on Jesus? Give me a break! Elaine Pagels and Dan Brown strike again! Does anyone really take this stuff serious?!

4 thoughts on “Gnosis with the Mostest Deux”