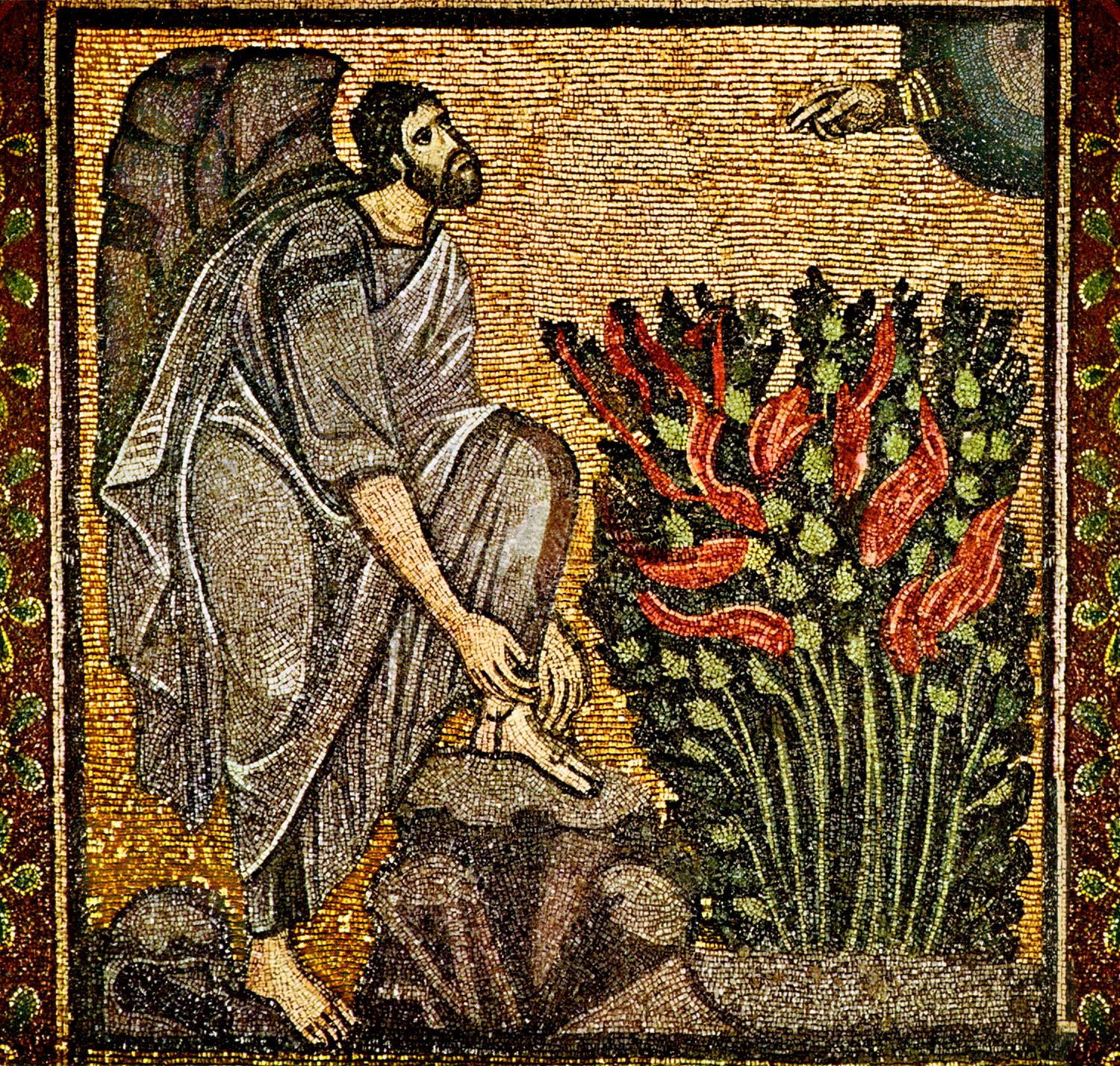 For the early Christians, training for baptism often involved looking at two different pieces of Scripture.  The first was the Sermon on the Mount, the other was the Exodus.

The Lectionary readings for Lent often follow this ancient pattern, and today is a good example.  We have the call of Moses prior to the Exodus, we have Paul’s warnings about the children of Israel after the Exodus, and we have Jesus’ warning about the fig tree, a symbol of the faithfulness and fruitfulness (or lack therof) of God’s people.  We will focus today primarily on the familiar story of Moses.

There are no throw away lines in Scripture.  God meets Moses where?  At a bush.  Do you know what the Hebrew word for ‘bush’ is?  It is ‘tsena.’  What word does that sound like?  That’s right ‘tsinai.’  The first meeting with Moses was at a little ‘Sinai,’ no less important than the Mount of Sinai.

This moment in Moses’ life, understandably was a watershed event in his life.  Remember that Moses was on the run.  He had spent his formative days as a ‘prince of Egypt’ but began to identify himself with the Hebrew slaves, because he himself was a Hebrew, a child of Abraham.  He saw a Hebrew slave being tortured by an Egyptian taskmaster, and he took the side of the slave and subsequently killed the Egyptian taskmaster.  He then fled to the wilderness of Midian and found a wife among the nomads and became a shepherd for his father-in-law.  It was while he was tending sheep that he found God–or I should say God found him.

There is an important back story that precedes the story of the burning bush, though.  You remember when Moses killed the Egyptian and became a fugitive.  What often gets missed, though is that Moses was not called to go to Pharaoh for decades.  He did his own wandering of the wilderness, filled with his own self doubt and his own searching.  He met his wife while sitting next to a well.  She and her sisters were going to draw water for their flocks and some shepherds tried to chase the sisters away.  Moses stood up for the sisters and they reported back to their father Jethro ‘a priest of Midian’ (whatever that means), that Moses had done such a thing.  Jethro rewarded Moses with his daughter Zipporah, and Moses worked for Jethro as a shepherd.  He was a shepherd for decades!

I believe God was preparing Moses.  Moses was a silver-spoon guy raised by Pharaoh’s daughter.  There had to be something in his life that helped him to identify with his people.  When his first son was born, Moses named him Gershom—which means, alien, sojourner, stranger, for, as he says, ‘I have been a stranger in a foreign land.’  Moses became an exile.  Moses was a refugee—God saw to it.  God was God in Moses’ life before he even acknowledged.  God is God of the past as much as he is God of the present.

Moses was prepared for the burning bush.

Notice when Moses sees the burning bush and hears the voice of the Lord (apparently through the mediation of an angel) what he is told immediately.  ‘Come no closer.  Take off your shoes, for you are on holy ground.’

Why would the Lord command Moses to ‘come no closer?’  Why do you think?  Because it was dangerous!  There is a wildness, a holiness about God that we have to continue to remember.  Scripture is clear that God is a loving, forgiving and merciful God.  But Scripture is also clear that there are times when we must take off our shoes and stand back, to bend the knee and to bow the head.  He is holy, he is altogether different from us.  He is no pal or buddy–he is the Almighty Lord of heaven and earth.

Annie Dillard is great on this point.  Referring to us and our liturgy she says:

‘The higher Christian churches—where, if anywhere, I belong—come at God with an unwarranted air of professionalism, with authority and pomp, as though they knew what they were doing, as though people in themselves were an appropriate set of creatures to have dealings with God.  I often think of the set pieces of liturgy as certain words which people have successfully addressed to God without their getting killed…If God were to blast such a service to bits, the congregation would be, I believe genuinely shocked.’

The first command of God to Moses, this venerable figure of the Old Testament, was ‘come no closer…take off your shoes, the place on which you stand is holy ground.’

As Kallistos Ware has said, ‘Our encounter with God is like someone walking over the mountains in the mist: we take a step forward and suddenly find we are on the edge of a precipice, with no solid ground beneath our feet but only a bottomless abyss.’

This is not the deist God that Americans know and love, this is not some ‘unmoved mover’ or some generic god or power of heaven.  This is, who?  ‘The God of your fathers (your ancestors).  The God of Abraham, Isaac and the God of Jacob.’  He is intimately involved with his people.  He is also a God who promised to deliver Israel–unfortunately for them, it took 400 years, but in case they forgot who he was–he is a God who saw, and heard, and knew them all.

But there is another important verb.  Not only does God say that he sees and hears and knows; ‘I have come down to deliver them.’

Next, look at the call of Moses.  As we know, Moses is full of objections.  ‘Who am I that I should go to Pharoah?’  In the same scene, Moses says, ‘I cannot speak, send someone else.’  Notice that God does not say, ‘Oh you’re a good guy, you can do it.’  Rather than spending time giving a pep talk to Moses, God rather puts the emphasis on himself.  ‘I will be with you.’  Later he says, ‘who gives a man his speech, is it not I the Lord?’

In Moses ministry and call, he had to concentrate on God and never himself.  Also, Moses had already started to move out in his call whether he realized it or not.  He stood up to the Egyptians, he stood up to the shepherds who were abusing the women at the well.  He was starting to be a voice for the voiceless, the defender of those who could not defend themselves.  God had called him.

What is the name of the God who calls?  It is a name that Jews to this day do not attempt to speak.  It is the Hebrew letters yod, he, waw, he.  That is YHWH.  In the original Hebrew text there are no vowel points and since the name is not uttered, Jewish scribes have simply used the phrase ‘Adonai’ or Lord whenever the name comes up.  Even in most of our English translations of the Bible, when the divine name comes up we translate it LORD.  This points to the fact that there is an unknowingness about God’s name.  There is an English medieval book written by an anonymous monastic simply entitled The Cloud of Unknowing.  That’s a great title.  There will always be an element of the ‘unknowingness’ of God.  As much as he has been revealed in Scripture, there are things about God that he prefers us not to know.  Remember his answer to Job—where were you?…  Gregory of Nyssa said, ‘God’s name is not known; it is wondered at.’

However, the diving name is not totally ambiguous.  The word comes from the Hebrew verb ‘to be,’ and we translate it ‘I AM.’  The word, incidentally only exists in the Old Testament and is found in no other literature.  So what does ‘I AM’ mean?  It is not primarily talking about the nature of God, because that is unknowable–but his relationship to us.  To be the I AM means that his presence and his purpose have nearness and immediacy.  To be the I AM is to have the ability to ‘bring about what is not currently present,’ as Old Testament scholar Walter Bruegemann has said.

Reflective Christians over the centuries have looked to Moses and the Exodus as a model of redemption in Christ.  Paul himself uses the wanderings in the wilderness as a warning.  The supernatural food and drink of the Eucharist and the waters of baptism Paul sees foreshadowed in the children of Israel who were guided by Moses to the promised land.  The ancient word for Easter is what?  Pascha–that is Passover.

The Christian faith is the only faith that has dared to say that the I AM of the Old Testament made himself known in the person and work of Jesus Christ.

It is interesting that when Paul says ‘there is no temptation that has overtaken you except that which is common to everyone…but with the temptation, God will provide the way out so that you will be able to endure it.’  Do you know the term for ‘way out?’  It is the word ‘Exodus.’

Jesus is the way out.  He is the one who saves us from our sins.  All we need do is repent.  So how do we repent in light of the holy God who calls?

Can we hear the call and do we sense the presence of Jesus?  I close with a Lenten reflection.  Donald McCullough wrote a book called the Trivialization of God.  He says,

‘[when we repent] We must pause long enough to become aware of our actual circumstances: our joyous gratitude, we discover, has led us into the throne room of the universe, and now we are in the presence of the Holy One who utterly transcends us, who holds together all creation from the smallest molecule to the largest galaxy and all history from the first page to the last, who is burning…against sin with the flame of purging love, who has claimed us in Jesus Christ and will keep us in the embrace of grace for all eternity—the God, in other words who is far more than we thought we wanted but for that reason exactly what we really need to draw us out of ourselves and away from every trivial god.’

One thought on “What’s in a Name–A Lenten reflection”