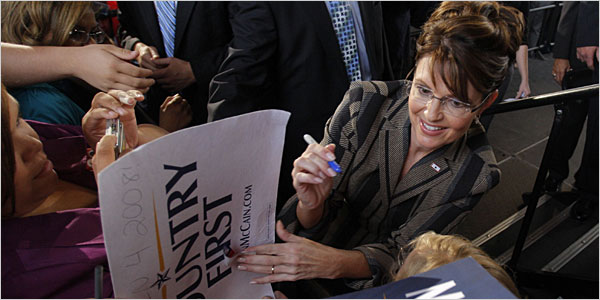 Here’s what a NY Times article posted on Palin:

In the address at the Assembly of God Church here [in Alaska], Ms. Palin’s ease in talking about the intersection of faith and public life was clear. Among other things, she encouraged the group of young church leaders to pray that “God’s will” be done in bringing about the construction of a big pipeline in the state, and suggested her work as governor would be hampered “if the people of Alaska’s heart isn’t right with God.”

She also told the group that her eldest child, Track, would soon be deployed by the Army to Iraq, and that they should pray “that our national leaders are sending them out on a task that is from God, that’s what we have to make sure we are praying for, that there is a plan, and that plan is God’s plan.”  See the rest here:

Many cite Romans 13 as a text that says the rulers and authorities have a seat of authority because God put them there.  Is Palin off base?  Can we speak of a war in the name of the state as a ‘Christian war’ that is ‘God’s will’ (regardless of its ‘just’ or unjust nature)?

I’m not talking about the ‘wall of separation’ as much as the nature of the Christian faith and its compatibility with war (any war) and politics.  I am fascinated with Christians on both sides of the aisle who insist that the other side is so utterly non-Christian.

I long for a day when the church will take the lead in values, peace, stopping abortion, feeding the poor, clothing the naked, visiting prisoners, providing health care, and stop waiting for the secular powers to do it for us.

Leave a Reply to The Nonjuror Cancel reply