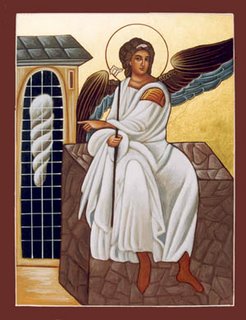 I am going to do what most preachers would not do on this day. I want to give you every reason not to believe what we have just heard and what we are celebrating this year.

What about the different ways the four evangelists describe Easter morning? Are there one angels or two? How many women were there? Which women actually were there? What were there names? The gospel writers don’t agree, how can we? But that is still not the best reason not to believe.

Do you want to know what the best reason not to believe this story? If we do believe it, then we are forced to deal with this prophet from Nazareth named Jesus on his own terms, not ours. If Christ is risen, he has something to say about how we live our lives. If Christ is risen, then indeed he is the Son of God!

There are reasons not to believe. But usually those reasons have to do with our desire not to be inconvenienced. And my friends, a risen Christ is inconvenient to all of us!!

Mark actually wrote his gospel with people like us in mind. The disciples don’t get it and the women are afraid to even tell anyone about the empty tomb that they have seen. I believe that Mark wanted to show us the first Episcopalians! ‘They said nothing to anyone, for they were afraid.’

Mark offers a challenge and that is the genius of his account. As one writer has said, ‘Mark’s ending shows that the historical, “Was it real?” ignores the more crucial question, “Is it real?” Something other than a pious dropping by the tomb once every Easter and looking in to see that it is empty is required to spark faith.’

The resurrection asks us to do two things. One, to believe the claims of Jesus and two, to proclaim the message. An irony of Mark’s gospel is that throughout Jesus tells those he has healed not to tell anyone about it, and of course they tell everyone. Here at the empty tomb, the angel tells the women to tell, and they go away afraid, silent. The challenge is for us, the disciples here and now to tell it out. To proclaim it on the rooftops.

But there’s one more thing. Mark mentions what the angels said to the women.
Why do you look for the living among the dead?

You have been looking for the living among the dead. You’ve tried the high life or the low life, however you want to put it, and you have found it lacking. Or you’ve got the two.5 kids and the SUV but life just ain’t cutting it. You’ve got cash, or you can’t wait to get some, but it just doesn’t seem to be enough.

If Christ is risen, than he is more than a carpenter. He is the Son of God, the second person of the Trinity, God of God, light of light true God from true God.

He lives, not only to pull you out of the grave clothes of death, but to take you out the grave clothes you’re living in now. The Easter celebration is wonderful, but if he doesn’t breathe life into you, if his life death and resurrection have nothing to do with you and me each and every day, we’re just playing around.

There are reasons not to believe. But usually those reasons have to do with our desire not to be inconvenienced. And my friends, a risen Christ is inconvenient to all of us!!

Why do you look for the living among the dead? Christ is risen. Invite him into your life today. The doors of the Kingdom of Heaven are open for you. Amen.

4 thoughts on “Why are you looking for the living among the dead?”