“The church grows when congregations are committed to the historic faith. God is in charge of us, He is in charge of his church and his world and he is not going to forsake us. He is going to stick with us regardless of our mistakes”—Retired Archbishop of Canterbury George Carey

“These monastic athletes, as one scholar has put it, ‘were not only fleeing from the world in every sense of the word, they were fleeing from the worldly church.’  The monasticism of the fourth and fifth centuries was a protest, in the name of the authentic teaching of Jesus, against an almost inevitable byproduct of the Constantinian settlement, the secularization of the church.”

At a  seminar/retreat a few weeks ago, we watched two very different films whose characters have similar impulse and similar inclinations.  Out of Great Silence, a silent documentary on the Carthusian monks in France and Into the Wild, Sean Penn’s depiction of the tragic journey of 22 year old Christopher McCandless, who fled to Alaska in the early 90s to escape the sickness of the world and the dis-ease in own his family.

In the films there is a beauty to solitude, being enraptured in nature and the deep quietness of the wilderness.  While there are numerous problems with our world, what stands out to me is our inability to see and to hear; that is, our inability to use our senses in their fullness–both physical and spiritual. 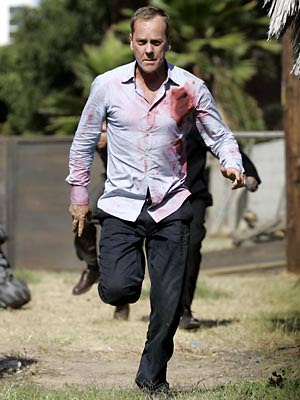 So I don’t watch a whole lot of TV.  Too much stuff to keep away from the kids.  But that 24 is just so danged addicting!

My wife and I watched 5 seasons in two months to catch up with season 6 in the Fall of ’07 (now we’re in season seven) and are back in the saddle, writers strike notwithstanding.

Anyone else in this place?

By now you can kind of guess what happens next–that every agency is ‘compromised’ and that Jack is the only one who can save the world–but man I can hardly wait till next Monday.

‘Following the rules makes us better than them [the terrorists],’ to which Jack replies,