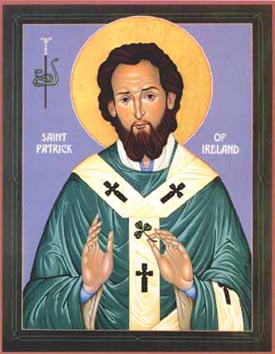 Stealing from my boy Chris Martin,

who is the real St. Patrick and when did St. Paddy’s become an excuse to drink ’till you puke? George Hunter provides an exceptional work in which he says that Patrick’s ‘way of evangelism’ is possible to imitate even and especially in our day.

What was Patrick’s ‘way?’

Patrick took a group of men (and women), clergy, seminarians and others to live among the ‘barbarian’ Celts (who had previously enslaved Patrick years earlier) to plant ‘holy communities.’ In these communities, Patrick’s folks would live in community to pray and work together, as well as to invite the locals to participate–to ‘come and see’ what Christians were all about. They built churches, prayed, partook of the sacraments, fed the hungry and healed the sick. These so called barbarians discovered that Patrick’s communities were ‘thin places,’ holy places where the presence of God penetrated space and time in an unusual, palpable way.

The Celts found their own experience of the world, with its violence, fear, and degradation, could not hold a candle to Patrick’s holy and peaceable communities. Violence, killing and idolatry ceased wherever Patrick’s communities took hold.

Perhaps people use March 17th as an excuse to drink themselves senseless because Patrick’s story has never been told by his spiritual descendants. Perhaps they don’t know that Christ can actually change people en masse, transform people groups and neighborhoods and that Kingdom living is possible to find–if you look in the right places.